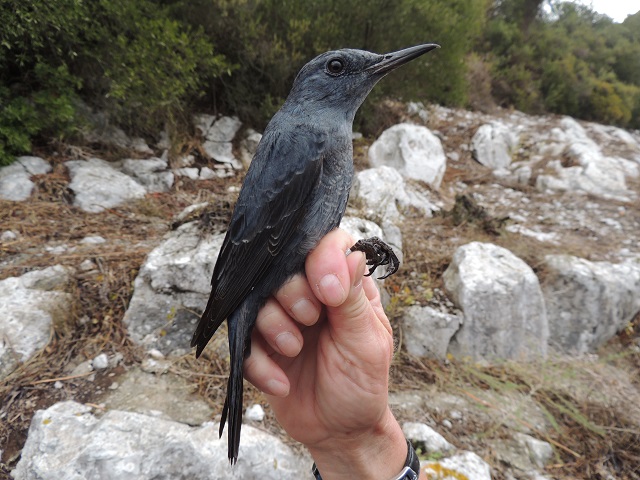 A dismal morning turns rapidly into a great day with good news and a fantastic catch. After the usual light round of Blackcaps and the threat of further showers and strong gusts threatening the safety of the nets, Julia returned with a single bird bag and a very big grin. Blue Rock Thrush - a target bird but very elusive. As the picture shows, the colour of the bird, despite being a juvenile, and length of the bill are both striking. Fortunately it was a male with little of the brown that characterizes females. Carl and my name were in the hat and I had the privilege of ringing the bird. What a perfect end to a great fortnight.

In the middle of the excitement, Richard Seargent texted to say that today he had reached his target of 200 members of the Army Ornithological Society and before he hands over. I know that we’ve all done our bit but great effort Richard!

There are two days remaining but my flight leaves soon and therefore this will be the last blog of the series. We have all benefited hugely from the experience of ringing birds out of our normal environments and with a lot of fun thrown in. Thanks to all my fellow ringers, Mark Cutts, Carl Powell, Julia and Robin Springett and particularly to Julia and Robin for setting up the exped. Lastly, Ann Powell has kept me under control and returning to the UK several pounds heavier. A great team. 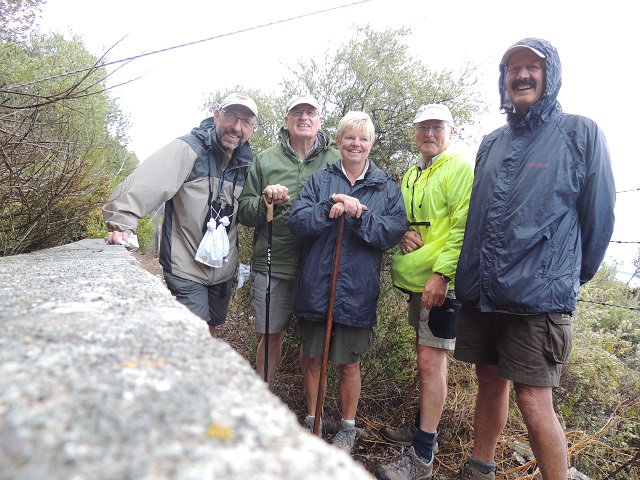 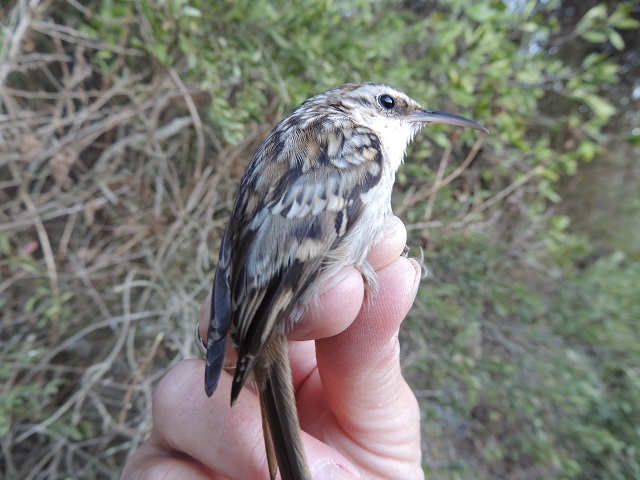 Who asked for a change of weather? It rained all last night and for most of the morning and into the afternoon. The upper slopes have been swathed in dense cloud. As there is no shelter on the slopes and it would take time to empty nets in a hard downpour, the ringing site was abandoned for the day. A couple of nets opened in the garden where we could monitor continuously, caught a new and a retrapped Blackbird. Suppressed excitement!

View from the uppermost nets 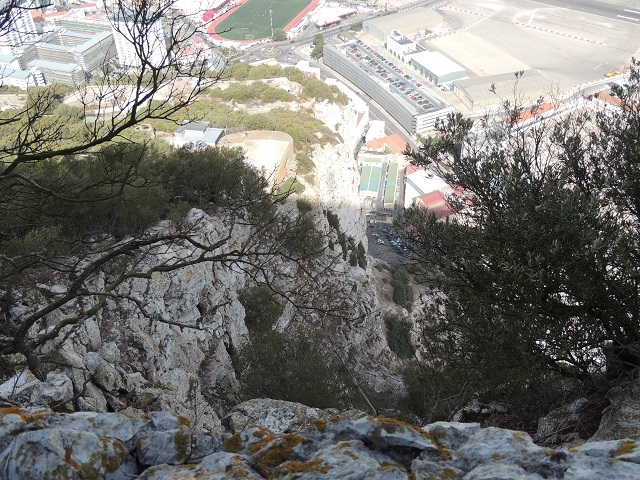 Wrestling to make something of the day, admin took priority and a chance to work on some species’ totals. It is without doubt that Blackcaps have once more held pole position and followed by Robins. On different days, other species have topped the list - Blackbirds, Pied flycatchers and Sardinian warblers in the early days, Redstarts in the middle and lately Chiffchaffs. Of the 748 birds processed, 300 have been in the last two days.

The team stay on for another couple of days but my last day’s ringing (weather permitting as storms are due) is on Monday before an afternoon flight out and home via two days with the BTO. Hopefully the final blog comes from Gibraltar airport.

Two great days of ringing at last! Weather in Spain and then a shift in wind to the East has resulted in a massive fall of birds for which we were unprepared. A high number collected in the first round was a clue, followed by the extraordinary sight of masses of birds in every single net. Now we were seeing chiffs and Willow Warblers that need careful handling and because of their size, were the most tangled. In total 197 birds on Friday. Today started with a gale and glum looks all round and we decided to keep many of the nets closed to avoid damage to the birds but the remainder, in the more protected places on the hill, still managed to catch 140 birds. Stars amongst them were Iberian chiffchaff, Grasshopper warbler, and Dartford warbler.

One of our overlapping diagnostic birds! Suggestions?

Oddly, this fall of passerines was not complemented with a passage of raptors. A Merlin put in an appearance and Ring ousel have so far evaded us. Still no nightjar despite their numbers during the dawn unfurling of nets and the Barbary Partridge have resisted the urge to take flight and be caught. To our discomfort, Jew’s Gate bird observatory have managed to catch Scops again and today caught the first recorded Common crossbill for Gibraltar. Nevertheless we did catch a control - a Blackcap ringed on the north coast of Spain near San Sebastian.

Both of our readers will have noticed that there was no blog last night. Slasher’s run ashore, before meeting up with the rest of the team for supper in the town, was a lapse in judgement and not to be repeated. However, his wife Nicky has now joined us and, less for the rugby this evening, normal service is resumed. 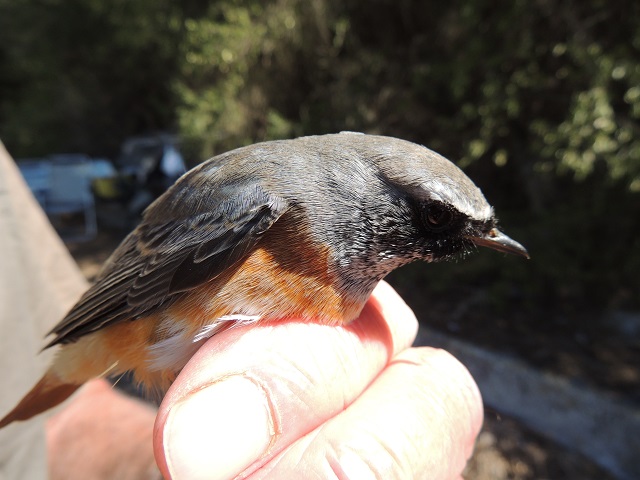 After yesterday’s fall of nightjars we rather expected a repeat today. So much so that we managed to persuade Steve Copsey to get up early and accompany us out to the nets well before dawn. This reasoning was reinforced by the sound of Scops owl calling from the garden during the night and a brisk breeze blowing across the slopes. Despite Jews Gate catching a record 5 Scops in their nets, nothing for us and so it was with relief that the first net round of the day produced a good mix of birds including redstarts and our first Chiffchaff.

The redstart theme continued for most of the morning (total of 6 birds) but usually with juvenile birds and it was mid morning before we caught the first male in full striking adult plumage. Always good to catch several species at the same time as it is one of the few times that plumage can be compared. A total of 54 birds altogether including 9 robins and, oddly considering the habitat and altitude, our second Reed warbler. Probably the best sighting of the day for all of us was a juvenile Cirl bunting and only the second to be seen since 1991. Regrettably no photos! 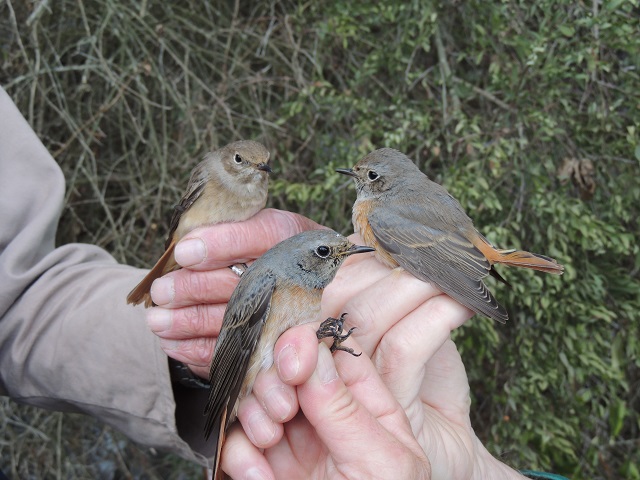 On the admin side, no lasting effects from last night’s chilli, Steve reverts from under command exercise to under command his wife who flew in this morning and Robin has discovered Wavepad - an excellent sound system for tape lures.

I have come to the end of my time in Kwa-Zulu Natal where there is no Zulu word for maintenance.  I have been helped by bird clubs and my host whilst I have been visiting.  I am in the humid town of Durban and finished birding In Pigeon Valley where I was early this morning.  At long last I was able to sight the Purple Crested Turaco that I constantly heard on my travels.  I spent all but the last day in Howick; the last person to sleep in my bed was a certain Capt Wales.  I visited many sites nearby including some original Afro-Montain habitat and today Scarp Forest habitat.  Yesterday I was counting Bearded and Cape Vultures at Giant’s Castle.  Endemics seen over the last few days  include Cape Batis, Bush Blackcap, Southern Boubou, Forest Canary, Cape Grassbird, Drakensberg Prinia, Gurney’s Sugarbird, Greater Double-collared Sunbird, Southern Double-collared Sunbird and Knysna Turaco.  I have had good views of African Harrier-Hawk, Emerald Cuckoo, Long-crested Eagle, Orange Ground Thrush and Dark-backed Weaver; their Afrikaans name translates  as forest musician.  I have heard more birds but as not seen are nor recorded.  An example is the Chorister Robin-Chat which was heard a lot at a farm which had an Open Garden week; the flowers were tremendous.  Quite a few visits were to Game Reserves.  As we were walking down a track my hostess reminded us about Puff Adders on the path and Leopard in the gorge; neither were met but we did walk past an old male Giraffe.   I have managed to see all 3 crane species and have visited a sewage works where a Goliath Heron put on various fly-bys.  I am now at 276 species for the trip as each day adds a few more.