The 2017 edition of The Adjutant (Volume 38) is now publicly available via the AOS website.

A small but select group made it for this year’s annual visit to the London Wetland Centre (aka Barnes WWT) on 27 Oct.

A total of 42 species were seen of which the highlights were undoubtedly:

• A pair of Peregrine Falcons perched on Charing Cross Hospital.

• Two Cetti’s Warblers singing in the open adjacent to the Water’s Edge Café!

• A Short-eared Owl resting in the Grazing Marsh and, as you would expect, pretty well hidden!

None of the attendees had any camera kit so a picture of the LEGO Short-eared Owl will have to suffice!  Should you have young family members and are within striking distance of Barnes the Giant LEGO Brick Animal Trail is still present but the last day is scheduled for 18 Nov.   You never know but, as we did, you may get to see the real thing! 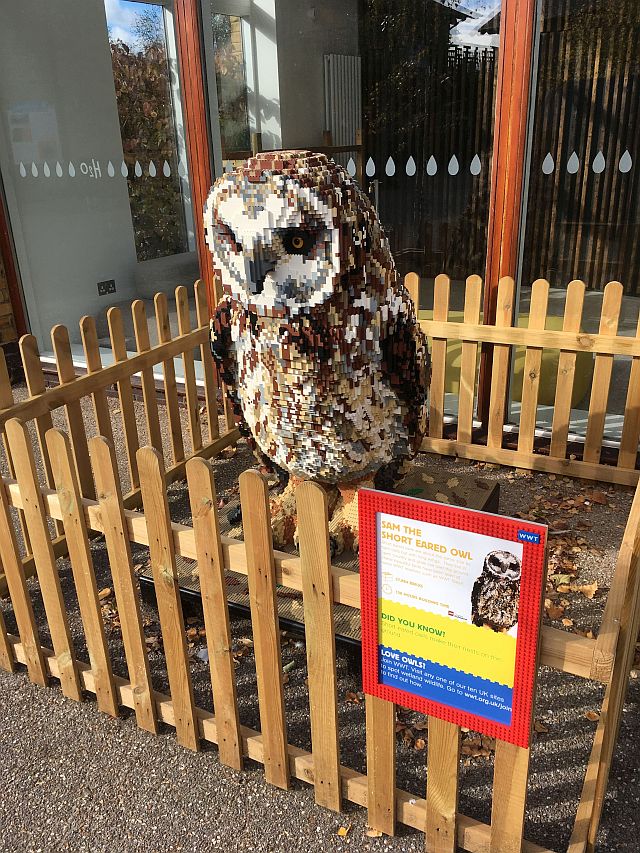 Time has flown past and I held my final AGM as Chairman of the Imber Conservation Group (ICG).  Next year the 3 groups will amalgamate.  The only difference will affect the hierarchy and the members will still continue to do their thing.  This year I have seen 65 species on the Plain though this list is not the total number of species for the ICG.  The latest involvement has been the Hen Harier survey.  Whereas my location has a Kestrel, Wren and plenty of corvids passing by the other 2 locations have recorded Hen Harrier, Short-eared Owl, Merlin, Golden Plover to name a few.  We have just recorded a Wheatear on the Plain and the Starling murmuration is starting to form up.  Last month I conducted one of my monthly Nature Walks and near Brounkers Well there were plenty of Yellowhammer, Blackcap, Reed Bunting and Meadow Pipit.  There were still plenty of Skylark on the old Stone Curlew plot where chicks were raised.  During the hot summer there was hardly a bird but it did not strike until the big ponds had delivered their toads!  We will also conduct a winter survey so hopefully I will have something to write about besides my travels across Europe (326 including firsts of Gyr Falcon and Little Bittern).

It is with great pleasure that we can announce that the new President of the Army Ornithological Society is Maj Gen Kevin Abraham CB late RA. A long-standing member of the ABWS and AOS, General Kevin is a very keen birder and looks forward to taking an active role in the Society.

Kevin Abraham joined the Army in 1983 having read Philosophy at St Andrews University. He was commissioned into the Royal Artillery and spent the majority of his time at regimental duty serving with 1st Regiment Royal Horse Artillery, whether in Germany, Canada, UK, Kenya, Bosnia or Kosovo.

He is Honorary Colonel of the Tayforth Universities Officer Training Corps (St Andrews, Dundee, Stirling and Abertay universities) and a member of the Honourable Artillery Company, serving on its Regimental Council.

Home is in Wiltshire with wife Julia and labrador Pip. Birding, sailing, skiing, and watching rugby are his principal interests.

Those who did not make it to Scotland missed out on an exceptional birding AGM with all the key species seen.  Back on the Plain there are changes afoot.  Red Cards are becoming harder to obtain and now we have to print off the daily DRS if we visit off the public tracks.  I spent a lot of time in France in June and July watching the football and naturally visted areas for birds including the Carmargue and Crau as well as The Dombes Region.  I have only visited the Plain a few times since then as access has been limited at times.  My botany skills are improving though it tends to the English names that I remember.  There are plenty of butterflies about and I still have to look carefully to seperate Small and Essex Skippers.  The species of birds during these quiet months tends to be those that you would expect to find.  These include the grassland species of Yellowhammer, Corn Bunting, Stonechat and Whinchat.  I have also been ringing which adds Redstart, Willow Warbler, Chiifchaff, Garden Warbler, Blackcap, Whitethroat, Reed Warbler, Sedge Warbler plus other buntings and finches to a long list. The other day there was even a Wood Warbler and a male Monty's was hunting nearby.  I am now recording various types of wildlife that I find including mammals and insects on the ICG website.  There are changes planned for this as well.  The one constant is that the Plain is still a military training area and is untouched by modern farming.