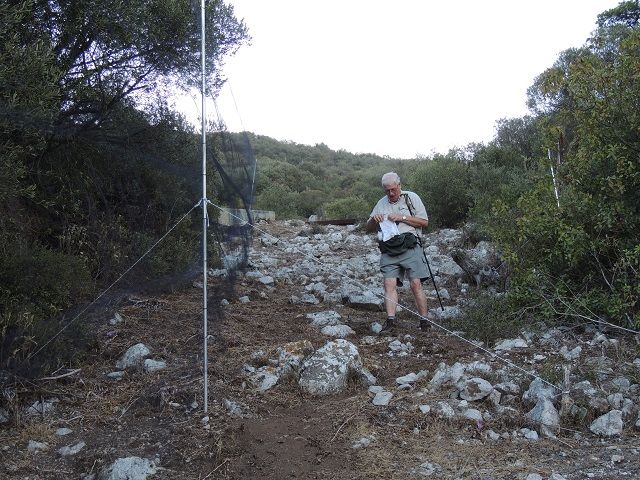 Never a good thing to believe that conditions can’t get worse because they always do, and today is no exception. This works well for Mark Cutts who, as new ringer on the block, gets all the birds to ring while the A ringers look on. This morning was, less for the heat and the one in two incline, like ringing in a country garden, with blackbird, wren, blackcap and robin first out of the nets. The sardinian warbler rather breaks the illusion but a light shower of rain also helped. While the Springetts, Carl Powell and I all expect the contrariness of a day’s ringing in Gibraltar, Steve Copsey had every right to expect a decent autumn raptor migration. Booted eagles appeared briefly with honey buzzard, common kestrel, goshawk and sparrowhawk but no further signs of lesser kestrel, osprey and short-toed eagle.

An unoccupied Robin Springett is always dangerous and after I had moved the nets a foot to the right of their original position, the constant gardener was away with the loppers and secateurs like Titchmarsh on double Red Bulls. An early return to the accommodation at Bruce’s Farm has allowed us to put up some nets in the garden, principally for Scops Owl but also for any ‘olive tree passerines’ that we can catch during the evening. If Jew’s Gate, a mile away, can catch them, so should we.

The blackbirds continue to cause problems with ageing. So simple in the UK but in Gibraltar the adults are often light grey and with speckled juvenile throat feathers. Nicely square tailed adult tail feathers are complemented by first year contrasts in wing colour. And to top it all, sexing, which is merely deciding how black are the tail feathers, is making us all question our definition of ‘black’.

Steve is still on the hill and has reported back 13 black storks so things might be beginning to move. So yet more prayers tonight for a change in wind direction; contrary to all the forecasts!

Slasher on watch looking after the ringing site

Slasher and Steve have arrived bringing a new dimension to activities on the Rock as well as rain and over-healthy appetites. Beer supplies have been quadrupled. There are now seven of us here in Gib, unfortunately coinciding with a real doldrums in bird activity. The Blackcaps and Sardinian Warblers are still here but the continuing westerly winds have stopped all bird movement at the north side and on the southern site at Jews Gate. But all is not lost as another Spotted Flycatcher, Pied Flycatcher, and Willow Warbler hit the nets. It’s hard to believe that this was our best ringing day two years ago!

One of the benefits of our site on the side of the hill has been being able to watch migration progress below us. It’s the time for Lesser Kestrels and almost on cue, one appeared today as well as a Common Kestrel and Sparrowhawk. With Steve here we should be able to get better photos and at least zoom into the high fliers.

The Macaques have forced us to drop two nets and relocate them elsewhere. We are not here to provide an adventure playground for immature monkeys and that is how they are treating the nets put up for Blue Rock Thrush. Still, it may give us a better chance at Red-necked Nightjar on a different part of the slope.

Praying that the weather changes!

A quiet day in all respects as the bustle of Gibraltar Town can usually be heard from our ringing station perch high on the Rock. A feeling of post rugby blues hung over us and there were few birds to break the gloom. Previous days have seen large numbers of Pied Flycatchers and Blackcaps as the most common birds in the nets but several Redstarts, a Nightingale and many Sardinian Warblers have kept us on a high. A single Short-toed Treecreeper, Garden Warblers and Willow Warblers add to the picture.

The catering team of Ann Powell and Julia Springett have made it increasingly difficult to stagger up the hill but the weather has so far been benign and not scorched us to date. Further nets were added to a particularly steep piece of rock on the northern side yesterday but macaques are taking an unhealthy interest in the nets. The families of adults and very young pass by without trouble but one or two of the juvenile macaques just have to see how far they can get with testing the guy ropes. Typical adolescents.

The Royal Navy arrive tomorrow in the shapes of Mark Cutts and Steve Copsey and we are very much looking forward to seeing them both. Extra rations have been bought!

The second visit of a mixed bag of Service ringers will begin shortly and this early blog gives due notice of future daily notes and photos of the scheme to ring birds on the north and western face of The Rock. Working closely with the Gibraltar Ornithological and Natural History Society, we will gather data for approximately 2 weeks from this part of the Rock, similar to the 2013 expedition. Based at Bruce's Farm, the team of Julia and Robin Springett, Roger Dickey, Carl and Anne Powell, Mark Cutts and Steve Copsey will be using over 1,000 feet of mist nets to catch autumn migrants, downloading data daily into the computer at Jew's Gate on the eastern side. The road team are off in 2 days followed by Roger, Carl and Anne by air. Once all the heavy lifting has been done and nets erected, Mark will join us. Hopefully Martin Routledge will also be able to ring with us at some stage.

If all goes well, we should manage some reasonable photos of southern european passerines, local birds, and also the huge passage of raptors of all kinds that fly just below our ringing site. Ringing starts at the very end of September if all goes well. 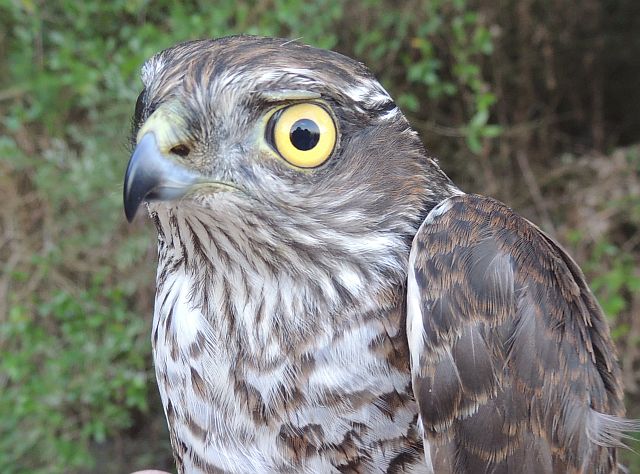 The last day of the Gibraltar joint Services ringing project and the pressure is off less for the need to take down an awful lot of nets with only three of us remaining. Trafalgar Night had taken its toll yet we were only slightly later at opening. Not a huge number of birds, less of course, for Blackcaps but a reappearance of Garden Warbler, Sardinian Warbler, and Pied Flycatcher helped to maintain interest. Our second Sparrowhawk, a young male (pictured) was one of the few raptors seen, and contrasted with the big female ringed by Mark Cutts two weeks ago. Charlie Perez joined us to ring a couple of birds including a Garden Warbler and confirmed our earlier ageing methods.

A last visit to upload our data into IPMR at Jew's Gate confirmed that since we started ringing at Middle Hill on 25 Sep:
1136 birds were processed;
1099 were new birds;
32 were retraps;
5 were controls;
In addition, 7 birds were ringed in the Bruce's Farm garden.

Acknowledgments go to Charlie Perez for allowing us to ring on Middle Hill in the Upper Rock Nature Reserve, Julia and Robin Springett for all the preparatory planning work required to find equipment and accommodation, all our ringers, particularly Mark Cutts and Carl Powell, the back up teams of Ann Powell, John and Sue Wells and John Hughes, and it was good to catch up with Ray Marsh, a long standing AOS member.

Finally a photo of one of our ringing lanes, overlooking Gibraltar town. 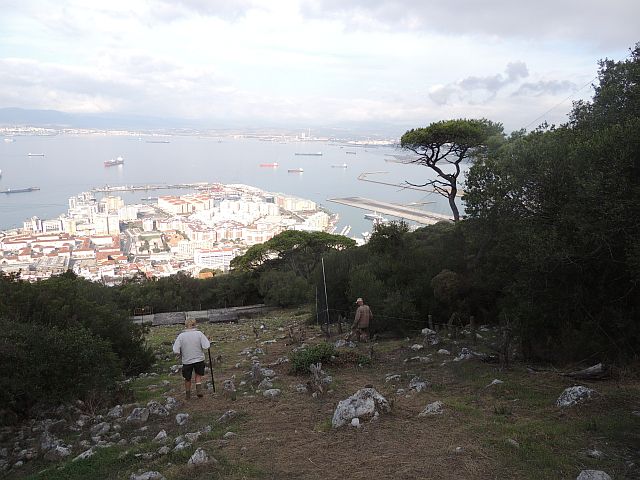