Mark's teddy bear has been sown back together and he has been placated by a Redstart. What did you expect when ringing with two A ringers? Charity?  So when the second Subalpine Warbler turned up yesterday and it was ringed by Julia, pieces of teddy were everywhere. It could be assumed that the next rarity would be his. Wrong. One of the first birds today was a Bonelli's Warbler (pictured) - a really delicate and beautifully coloured bird and so I had to ring it. Poor old teddy.

Alarmingly, having opened the nets on Middle Hill in the dark, the first net round in the light was confronted by a large family of 'apes'. They have more right to be on the hill than we do and so they were gently persuaded to leave. A rather slow tick-over of birds followed but produced the Bonelli's and some Redstarts among the Sardinian Warblers and, a first for the trip, a pair of Pied Flycatchers. Again, Iberian Chiffchaffs in reasonable numbers, which show more of the colouration of Willow Warblers than Common Chiffs. Only 29 birds ringed today but we are still ringing more than Jews Gate at the moment.

With that thought in mind, we put up yet more nets! We now have 18 nets totalling 324 feet but we have at least produced a circuit so that we only pass the nets once, albeit crampons are needed for half of it. A gentle start stalking Red-necked Nightjars tomorrow (a European Nightjar heard this morning) and a better day for teddy perhaps. 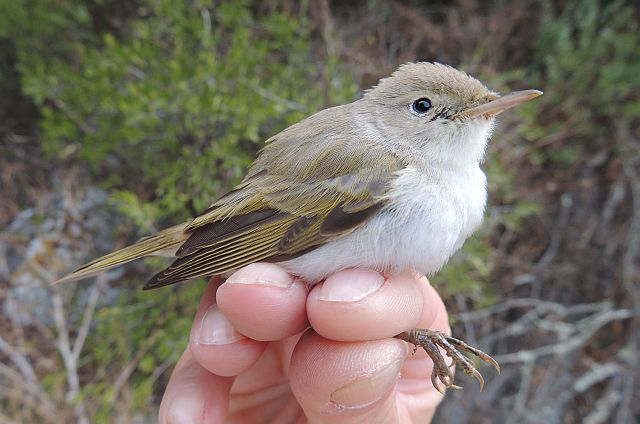