At last some good news and it started as we drove from Bruce’s Farm up to the ringing site. A Red-necked nightjar sat on the road dazzled by the car headlights. An attempt was made to creep up on the bird but at 6 feet away the bird flew. This was followed by close sightings of two further birds and Carl Powell finding yet another sat on the net pole. Here the luck rather runs out as no birds flew into the nets but we now know that they’re back!

Plenty of Pied flycatchers today for which we have managed to sort out the sexing while ageing is not a problem. There are still juvenile birds that we are unable to sex as biometrics often show the characteristics of both sexes but we have grown more comfortable with this. A single Spotted flycatcher was a treat as was the Garden Warbler and sad to say, the Wren. Other than some interesting plumage variations, only a single Sardinian warbler reminded us that we were ringing abroad. 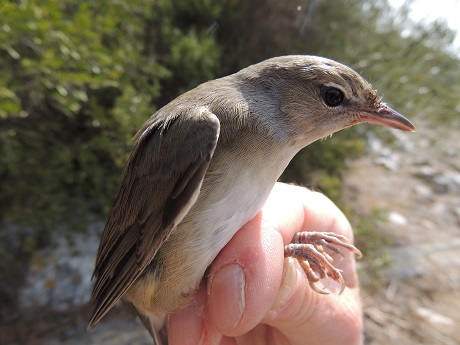 Our garden nets newly erected last night have yet to prove their full potential but Slasher is on the job. Starting the Scops owl tape at full volume under my window at 04:45 was less than guaranteed to get a good reception at breakfast but if it catches owls... So far only Blackbirds and Pied fly caught but we have faith.

Steve Copsey’s trip up the Rock confirmed that yesterday’s raptor numbers have dwindled to Kestrels and Sparrowhawks with no migrants but as nothing escapes him, we are pretty sure that the ringing team have missed nothing. Tonight the naval contingent are cooking and giving Ann and Julia the night off. Chilli con carne with a variety of sauces for extra heat. The Andrex is in the fridge!