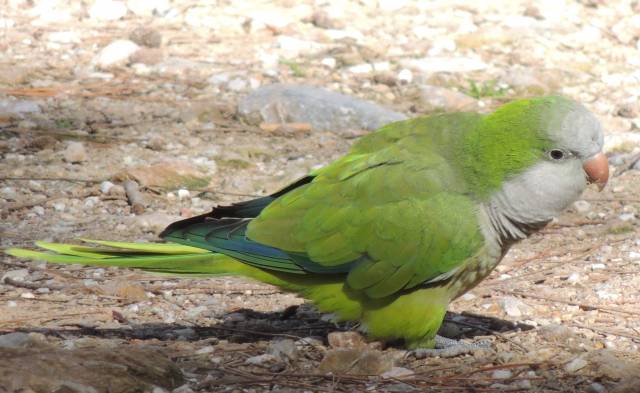 I managed to get out after work on Monday for the first time this year, it’s getting lighter and birding opportunities are improving.  Akhna Dam held a Great White Egret, Redshank, 4 Snipe, a couple of Song Thrush and a Cetti’s Warbler, whilst on the way home a Little Owl had returned to its roost site in Vrysoulles.  On 11th I visited the Larnaca area and at the sewage works found a lone drake Ferruginous Duck amongst 500 or so Coots.  A pair of Wigeon were still present but wildfowl had reduced considerably.  With 3 Black-winged Stilts and a female Marsh Harrier with 24 Black-necked Grebes, that concluded the interesting sightings for the site.  In the airport fields, a lone Lapwing fed and was flushed by a female Hen Harrier.  2 Cormorants were offshore but little else was present except for c250 Golden Plovers on Spiro’s Pool.  At the north airport pool, 5 Stone Curlews were unexpected with 4 Redshanks being amongst the numerous Black-headed Gulls.  I progressed to the north end of the salt lake as I hadn’t visited for a while.  Shelducks had increased to c900 making quite a site and Greater Flamingos only numbered about c150.  As I waded about in my wellies, I heard and then located a singing Moustached Warbler – always nice to hear but usually means that they’re not going to be around much longer.  Certainly seeing one in the last week of February is unusual.  A Reed Bunting responded to a bit of “pishing” but the 6 or 7 Water Pipits flushed along with a Bluethroat.  Snipe were numerous and 8 Spur-winged Plovers were very noisy and must be breeing.  A Green Sandpiper flew from the reeds calling with Redshanks as 3 Swallows and a Marsh Harrier were overhead.  As I returned to the car c4500 Starlings in mermeration made quite a spectacle before they roosted in the reeds.

On Wednesday I had to visit Troodos for a meeting which ended at about 1500.  I walked to the village seeing many of the common mountain species along with my first Jay of the year.  5 Crossbills were nice to see as was a close Short-toed Treecreeper.  As I continued to walk the area a large flock of birds flew up from the ground and perched in the surrounding pines, I got onto a few and they were Yellowhammers - a difficult bird in Cyprus.  As I followed them around there must have been 20+ in the area.  Several perched in a pine in front of me and I was struck by a brown and white bird lacking any yellow undertones with a brownish/grey head and an obvious whitish supercillium.  I soon realised that it must be a female 1st winter Pine Bunting – probably annual in the Troodos range but rarely recorded.  I have submitted a description pending the adjudication from the Cyprus sub-rarities committee.

On Thursday morning we flew to Athens although, a House Martin was a Larnaca Airport before we left and a Black Francolin was calling.  We arrived in Athens to warm sunshine and the first birds were House Sparrows, Magpies and Kestrels.  We walked around in the early afternoon and many of the usual city and park birds were present including an obliging Starling*.  On 14th, Friday we visited the Acropolis where Yellow-legged Gulls and a Peregrine were overhead.  As we descended the slopes and walked around, a Robin* posed for the camera as did a Blackbird*.  Chiffchaffs and Blackcaps were singing and seen as was a male Sardinian Warbler.  Finally, a female Black Redstart* sat up for the camera.  Song Thrushes were dashing between the trees and after watching the “changing of the guard” at Syntagma Square – the Presidential Palace (not sure this drill or dress will catch on) we moved to the city’s National Garden.  I was extremely pleased to catch up with…… wait for it a Blue Tit*, having not seen one for 20 months since leaving the UK, it was a good moment.  Commoner birds like Magpies* posed for the camera and Blackbirds were everywhere singing.  I photographed a sign* which in Greek and English, a Greek Cypriot would surely understand and yet at the same time have absolutely no comprehension of.  It reminded me when I saw common birds behaving like they do in the UK what a detrimental effect a destructive culture like the Cypriots have on the environment and wildlife.  As seems to be the norm in Southern European cities now, the ubiquitous Parakeet colonies – this time Monk Parakeets* with several Ring-necked Parakeets*.  I also photographed a Grey Wagtail* in the park and in the nearby Temple of the Olympian Zeus, I photographed a Serin which was one of about 15 feeding on the grass with Chaffinches.

As we walked around Athens in the evening, I heard a pair of calling European Scops Owls and a Little Owl.  My final bird before leaving Athens on Sunday afternoon was a Hawfinch at the Acropolis flying into an area of old oak trees.  A respectable 24 species on my newly started Greek List.  We returned to Cyprus at 1815 and it was dark.  I opened my email to find that Bramblings in Troodos, a Steppe Grey Shrike at Pervolia and 4 Red-breasted Mergansers at Ayia Trias had been seen in my absence.

Highlights of the Week:  A 1st Winter Female Pine Bunting amongst Yellowhammers (description submitted – awaiting acceptance by the Sub-rarities committee).

Look Forward:  A hunt for a reported Steppe Grey Shrike and the rarity chase.

If you are planning a visit or require more info please feel free to contact me at:  birder639@yahoo.com